I was raised with homeopathy, my mother being into all things “strange”: homeopathy, nutrition, acupuncture and holistic living...
About Testimonials Holistic Vet - Dr Nick Thompson 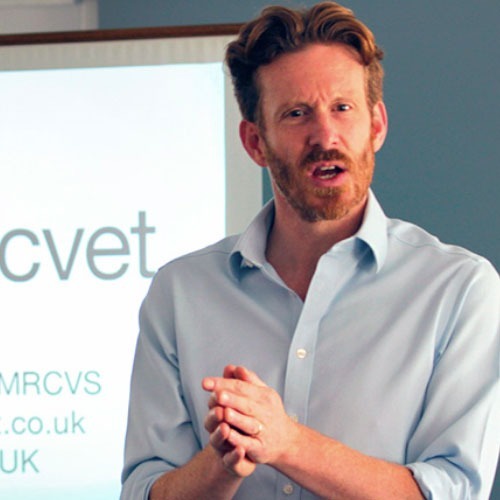 I was raised with homeopathy, my mother being into all things “strange”: homeopathy, nutrition, acupuncture and holistic living. I still remember as an eight-year-old my disgust at being offered brewer's yeast in a smidge of apple juice for my general health. It's funny how these ideas were considered cranky in the 1970s but are now universally accepted as essential mainstream tools to good health, apart from homeopathy, perhaps.

In the mid-1980s I went to Edinburgh to study veterinary medicine. On the way I picked up an Honours Degree in Pathological Sciences (immunology, virology, molecular biology and a little parasitology), as I knew I would be working with non-orthodox medicine and wanted credentials to bolster my position.

When I qualified, I went into conventional practice in Yorkshire and loved it. I thought I knew everything, so didn't think much about homeopathy and holism for several months. Then it struck me that I was using drugs on animals where I would not use them on myself; recommending processed food, where I strove to eat well; and trying to do good medicine in 10 minute consultations, which is impossible.

I applied to do the vet course at the Royal London Homeopathic Hospital, as it was then. I did a year there; then continued my studies with the Homeopathic Physician's Teaching Group with some inspiring doctor colleagues.

After three years at the James Herriot practice near the Dales, I decided I needed to use my homeopathy and work holistically. I joined a newly formed practice in West Sussex run by the homeopathic vet Mark Elliott. Here I cut my homeopathic teeth prescribing Antimonium Tartaricum for rattling lungs in horses, Phosphorous for post-op complications in dogs, Staphysagria for resentful cats and Arnica for everything! One Collie from Portsmouth came to me with noise phobia. Not unusual for a Collie, but if you live in that town, every day you have to deal with the Noon Day Gun. She resolved nicely with good old Aconite.

During my time at the Kingsley Veterinary Centre, I began to use constitutional prescribing more and more. The case that stands out in my mind was a large, lovely nine-year-old Labrador-cross called Harry who was found to have massive, inoperable and spreading stomach cancer. The vet operating offered to put him down on the surgical table or send him home to die. The owner opted for the latter and gave us a ring. After a half hour consultation at the practice, we decided that Harry was a Phosphorus type (very open and gregarious, less happy alone, incredibly sympathetic, thirsty and loved to be warm), so I prescribed Phosphorous 1M, split single dose.

Harry came back to see me two weeks later (good start!), then a month later, then a month again after that, much to my pleasant surprise. I saw him for about four months in all, during which time he maintained his weight, his appetite and joie de vivre. Harry’s fate after that is a mystery to me, but I think of him now and again and am glad we gave him at least a few more months of great quality life.

Another prominent case from those early years is Pip. He was a 12 year-old New Forest Pony with savage Sweet Itch (a skin allergy to midges). Most Sweet Itch horses itch for two to six months during the midge season. Pip itched 11 months of the year and had done so for the previous 10 years, only being completely normal in January-time. By June of each year he had developed “rhino skin” where he’d been itching his wither and tail so much.

He received Arsenicum album 1M after my initial consultation in August and I thought it a fine prescription. After four weeks, he was as bad as ever. I re-took his case and prescribed Sulphur. On the wall of my practice today, I still have a picture of him taken the following July in gleaming summer coat without a hint of thickened, greying skin, looking impish and inquisitively towards the photographer.

Since these early forays into homeopathy, I have broadened my holistic approach within my own practice (Holisticvet in Bath) and now offer medicine encompassing many approaches to homeopathic prescribing, such as the Ramakrishnan approach to cancer, Hahnemannian prescribing at many levels, the eclectic prescribing espoused by Ian Watson, to name a few. In addition I use acupuncture, raw food nutrition and herbal medicine to treat horses, dogs and cats. And despite what some would view my unorthodox approach to veterinary medicine, I have a good relationship with most vets I deal with in the Bath/Bristol area and beyond.

But none of this would have happened without homeopathy to open my eyes to the true nature of health, disease and healing.

Founded in 1844 • Incorporated by Act of Parliament 1950 • Patron: HRH The Prince of Wales
Log in | Powered by White Fuse